When the Frenchman was first appointed in 1996, the Gunners called Highbury home, were yet to qualify for the Champions League and had Ian Wright leading the line.

Wenger has since gone on to win threePremier League titles, qualify for 16 consecutiveChampions League tournaments and lift four FA Cups but claims that the time has flown by.

He told the club’s official website: “It makes you feel: ‘Where did the time go?’ It looks to me like I started yesterday, I can’t believe it is such a long time.

Wenger’s “drug” this time is a trip to the league leaders and, while Arsenal have a game in hand over Jose Mourinho’s men, defeat would be a bitter pill to swallow as he chases his first silverware in nine years.

Chelsea come into this clash off the back of a comfortable Champions League victory over Galatasaray, which saw them sail into the quarter-finals, but will be keen for a return to winning ways on the domestic front after losing 1-0 at Aston Villa last time out – a match which they ended with nine men and Mourinho sitting in the stands.

The Portuguese has since been charged with improper conduct for encroaching on the field of play and has been given until Monday to respond but declared in the build-up to Saturday’s game that he would be delighted to emulate his opposite number’s achievement.

“If Chelsea give me the chance to arrive to 1,000 matches, I’ll be the happiest manager in the world,” he told reporters. 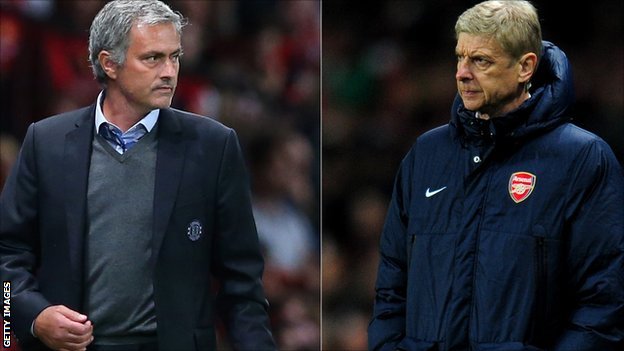 Arsenal’s midfield injury troubles continue with Aaron Ramsey (thigh), Mesut Ozil (hamstring) and Jack Wilshere (foot) all ruled out but Kim Kallstrom could be in line for his first inclusion in the matchday squad since joining the club on loan in January.

David Luiz was fit enough to make the bench for Tuesday’s Champions League triumph and may take his place in the starting XI, while Ashley Cole (knee) remains a doubt after missing out in midweek. Brazilian duo Willian and Ramires are both suspended following their dismissals against Villa.