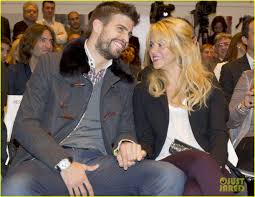 So Gerard Pique Mebarak can be a jealous lover, he will not allow Shakira to make videos with the guys, this explains the chemistry in her music videos when she features ladies like Rihanna, Pique considers it inappropriate for her to do racy music videos with other men but feels cool when it is with ladies, this explains the reason why she can go all the way with the ladies in music, her latest collaboration with Rihanna in ‘Can’t Remember to Forget You’ can only be defined with two words, ‘smoking sexy’.

Shakira said he is very territorial, and since he no longer lets her do videos with men, well, she has to do them with women. It’s more than implied in their relationship that she can’t do videos like she used to. It’s out of the question – which she likes, by the way. She likes that he protects his turf and he values her, in a way that the only person he would ever let graze her thigh would be Rihanna. Hmmn….

Pique won her over with his charm and attention during the World Cup, he’d say If he score a goal, he will dedicate it to her . But they weren’t dating then. Shakira is not ready to give up music now. A part of her – well, all of her – wants to be with her family all the time and be a housewife, she said. But there’s another part of her that still wants to make music and that’s still pleased with success. She won’t deny it. She know it sometimes sounds almost immoral to admit you like success, but she likes it that way.